The Japanese Wreck is situated on the east side of the three Gili Islands, just off Lombok. Its a Dive site for the more experienced divers, as it is a decompression dive due to the depth being 45 metres. The 22 metre Japanese patrol boat from World War 2 believed to be scuttled in 1945. It  lays upright and perfectly intact on a sandy bottom. The Wreck is situated in a protected bay and it is usually unaffected by the currents. Simon Liddiard the owner of Trawangan Dive and Blue Marlin Dive, heard the story from a local fisherman when he arrived on Gili Trawangan 25 years ago, he spent a month searching for it before he found it. Only Trawangan Dive and Blue Marlin Dive has the GPS co-ordinates for the Wreck and as such there are relatively few people who have dived it.


On the 28th February we visited the Japanese Wreck which took approximately 20 minutes to get to the site from Gili Trawangan. It was covered in a  large variety of pristine corals and on the outside of the patrol boat was inhabited with large numbers of Lionfish, Stonefish and we also were lucky enough to come across a Frogfish. Around the Wreck there were large schools of Travally, Yellowtail Kingfish and Snappers. Further inside the wreck we found an abundance of marine life including Moray Eels, Squirrelfishes, Groupers, Sweetlips, Sweepers and Drummers. Due to the depth of the dive it was a Enriched Air (Nitrox) dive so we were able to get the most out of the dive. It was an amazing dive and the customers had a great experience! 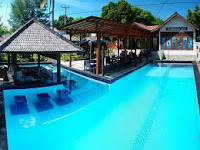 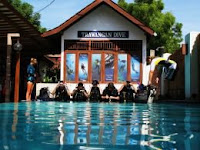